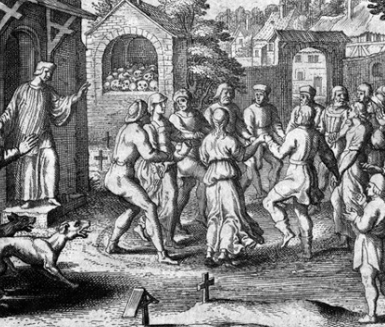 Back in the summer of 1518–500 years ago this month–the French city of Strasbourg went crazy. According to reports, hundreds of people felt compelled to dance for no reason. Think of the craziest rave possible. People danced in a trance for days until they either (a) passed out or (b) died from exhaustion.

PublicDomainReview.org picks up the story.

In a hastily built stage before the busy horse market of Strasbourg, scores of people dance to pipes, drums, and horns. The July sun beats down upon them as they hop from leg to leg, spin in circles and whoop loudly. From a distance they might be carnival revellers. But closer inspection reveals a more disquieting scene. Their arms are flailing and their bodies are convulsing spasmodically. Ragged clothes and pinched faces are saturated in sweat. Their eyes are glassy, distant. Blood seeps from swollen feet into leather boots and wooden clogs. These are not revellers but “choreomaniacs”, entirely possessed by the mania of the dance.

In full view of the public, this is the apogee of the choreomania that tormented Strasbourg for a midsummer month in 1518. Also known as the “dancing plague”, it was the most fatal and best documented of the more than ten such contagions which had broken out along the Rhine and Moselle rivers since 1374. Numerous accounts of the bizarre events that unfolded that summer can be found scattered across various contemporary documents and chronicles compiled in the subsequent decades and centuries. One seventeenth-century chronicle by the Strasbourg jurist Johann Schilter quotes a now lost manuscript poem:

Many hundreds in Strassburg began
To dance and hop, women and men,
In the public market, in alleys and streets,
Day and night; and many of them ate nothing
Until at last the sickness left them.
This affliction was called St Vitus’ dance.1

Another chronicle from 1636 relates a less happy ending:

In the year 1518 AD … there occurred among men a remarkable and terrible disease called St Vitus’ dance, in which men in their madness began to dance day and night until finally they fell down unconscious and succumbed to death.2

The physician and alchemist Paracelsus visited Strasbourg eight years after the plague and became fascinated by its causes.