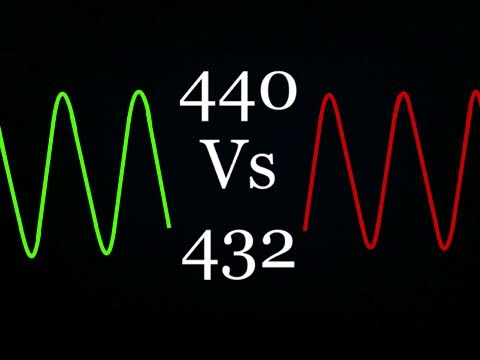 Eighteen months ago, I wrote a piece for Global News about how our standard 12-note Western scale of music is all wrong.

Over the decades, it was determined through international convention that all the notes on our scale had to be anchored to the frequency of Middle A, which is set at 440 Hz. Every other note is a ratio related to that frequency.

However, there are those who believe that this is very, very wrong and that a more “natural” and “pure” mathematical state of Middle A should be either 442 Hz or 438 Hz. The difference is subtle, but adherents to this theory contend that music with his tuning just “feels” better.

Here is an audio example of what I’m talking about.

I recently received an email from John who would like to advance this concept even further.

Looking at things slightly differently, he says that the correct tuning for a piano keyboard has Middle B (also known as B4) tuned to 480 Hz. This would actually put Middle A to just below 428 Hz. Very subtle, but noticeable.

If you move down the keyboard to B1–the second-lowest B on the keyboard–you end up at a frequency of 60 Hz, which is the hum we hear from leaky electrical transmission lines in North America. That could bugger things up when it comes to reproducing music electronically at low frequencies. Is that why I need an AC power-scrubber for my high-end stereo?

“Electronics tend to beep at concert B, in particular things that beep in hospital ICU’s and fast food restaurants. They are usually set to B6, high B a half-step below soprano high C. You can’t sub-vocalize that high unless you sing opera, and that note is almost never encountered in ordinary music, so is next to impossible to process. That’s pretty well engineered to drive baristas and nurses insane, unless they’ve spent a whole lot of time listening to Shostakovitch’s Symphony No. 2 on their headphones.

“If you have a microwave oven, press the reset button and observe the tone of the beep. If it’s approximately concert B natural, what octave (e.g. about B6?) and is it close to a B tuned to A440 or is it a multiple of 60 Hz? Repeat for electronic kitchen timers you might have lying around.

“Have a look at Chopin Nocturne Op. 9 No. 3 in B Major (Arthur Rubinstein).  B Major attracted very few works.”

For more (but unrelated) fun, check out John’s 1976 thesis on “A graph theoretic model for configurational isomerism.” Great holiday reading.

One more thing: You think that you know silence? Maybe not, This Weird Chord Should Not Work, But It Does. Why?