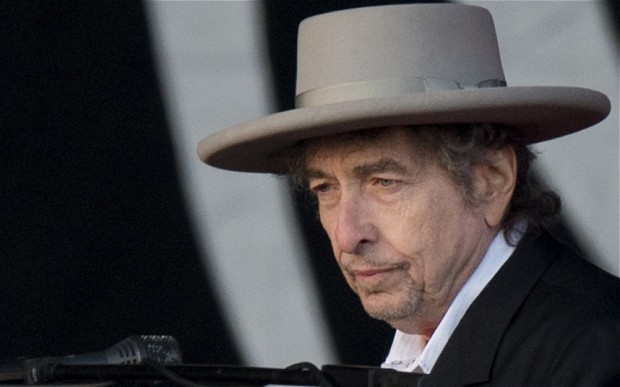 So Zimmy is now a Nobel laureate having been awarded the 2016 prize for Literature. This no doubt annoys some high-forehead purists who believe that rock’n’roll will forever be a vulgar artform–if it’s an artform at all.

Calm down, freaked-out elitists. Bob Dylan has long been worthy of such an honour. As the single most important individual singer-songwriter of the 20th century, his songs–poetry, political commentary, social activism, anti-war sentiments, civil rights issues–have influenced countless other musicians (beginning with the Beatles and Jimi Hendrix and extending to Springsteen and then every subsequent singer-songwriter with something to say). Steve Jobs and Steve Wozniak were brought together by two things: computers and Dylan records. And how many political and social activist types were inspired by Dylan’s words and music?

The Nobel Committee summed it up like this: Dylan needs to be recognized “for having created new poetic expressions within the great American song tradition.”

As for rock fans, this is definitely a big deal. When Dylan released “Like a Rolling Stone” in 1965, rock’n’roll was looked upon as ephemeral, disposal music for kids. It wasn’t a “serious” or “proper” form of expression. But after albums like Highway 61 Revisited, the status quo began to take this music seriously. The “rock’n’roll” of the 50s and early 60s became known as “rock” as it morphed into an “acceptable” artform. This award completes a 50-year quest for rock’s legitimacy as art.

Zimmy a Noel laureate? Absolutely. A thought: How many years will it before for a hip hop artist is acknowledged in the same way?

Announcement of the 2016 #NobelPrize in Literature https://t.co/VXayV4bvhC

PS: I’m off to Desert Trip in California where Dylan will perform his first show since receiving his Nobel. That should be interesting. Maynard James Keenan of Tool released this short Easter film about his ducks.

2 thoughts on “Bob Dylan Wins the Nobel Prize for Literature”