[The Foo Fighters will make up for their missed Glastonbury gig in 2015–that was the one killed off when Dave Grohl broke his leg–with a Saturday night appearance on the Pyramid Stage. The announcement came prior to a club gig they played down the road in Frome. Gilles LeBlanc has this review of the show. – AC]

FOO FIGHTERS AT CHEESE AND GRAIN

On a day when Donald Trump barred major media outlets from a press briefing (except for Breitbart and Fox News of course), Foo Fighters made their live return in a tiny UK town as part of a worldwide webcast.

It didn’t take long for Internet speculation to reach rampant proportions when FooFighters.com began promoting something called “Obelisk Airlines”, with a countdown clock promising in-flight entertainment. Turns out it was all to officially announce America’s favorite post-grungers as the second headliner for this summer’s Glastonbury Festival. (Radiohead nabbed the first prime slot a few months back.)

In a video that has since been removed, there was an introductory skit of sorts starring Glasto founder Michael Eavis and his daughter Emily, who drove to meet the FOOs at an empty Pyramid Stage, the band wondering why no one was there to see them rock out. You’re a tad early, the younger Eavis explained, but there’s a nearby venue in Frome she was confident would be happy to host their first proper gig together in over a year.

It may have been at a place with a quirky name (Cheese and Grain? Well Glastonbury IS in farm country), but Dave Grohl & Co. went through what sure felt like a festival-topping set worthy of the biggest band in the world tag. Supersized anthems? Check. Extended guitar and drum solos, with cool transitions between songs that included a few covers? Double-check. “Help Me Rhonda”? WTF? Fan-yelled requests off the 1995 FOO debut like “Wattershed”? Check, mate! The five-man squad plus keyboardist Rami Jaffee sounded like they hadn’t missed a beat, right from the “Learn to Fly” get-go to traditional concert closer “Everlong”. Songs played courtesy of Setlist.FM.

Grohl was a little rough and tumble rusty. Then again, isn’t that him at the best of times? I sure as hell hope people don’t go to a Foo Fighters show for Grohl’s vocal artistry. He’s no Adele, fer chrissakes…

There are still questions begging to be asked though: Do the FOOs have any further plans for their new mock airline venture? They’d sure look good on the Osheaga lineup poster that will be revealed Tuesday February 28th. Or maybe for Festival d’été de Québec, so the group can complete the electrifying performance that was unfortunately cut short by a lightning storm.

Finally, how the $#@% will they possibly top tonight four months from now at Glastonbury? 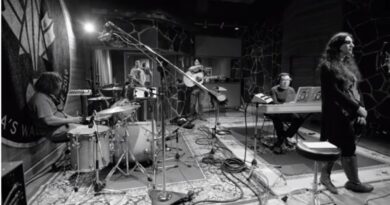 ASD Kicks Out the Jams for Canadian Autism Awareness Month