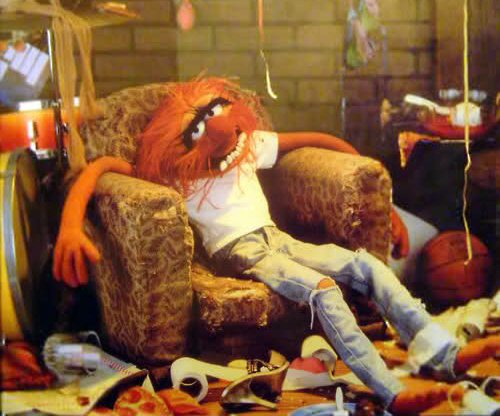 With speed metal, the faster the better.  But there are human limitations, especially if you’re the drummer.  This has led to a crisis of existentialist proportions.  The Wall Street Journal (of all people!) reports that some speed metal bands are dumping human drummers for drum machines.  Why? Because they can’t keep up.

Ever since spinning out of rock ‘n’ roll in the 1970s, metal has gotten faster and faster. Like many drummers of his generation, Mr. [Gene :the Human Drum Machine] Hoglan left the drum-pounding abilities of his heroes in the dust, fueling an arms race that has sparked an unlikely crisis. Speed metal, as this subgenre is called, has become so fast that drummers can’t keep up. Instead, more bands have quietly switched to using computerized drum machines.

Mark Mynett, a British music producer and lecturer at the University of Huddersfield’s Department of Engineering and Technology near Manchester, England, says he once “produced a whole album where the drummer didn’t play a single bass-drum track on a single song.” He likens it to “magazines airbrushing models.”

How did heavy-metal drumming get so fast?