FastCompany says musicians are at war with YouTube for lost revenue due to unauthorized streams of their songs, or allowing unsanctioned remixes, covers and other interpretations of their work to remain online.

Rolling Stone says YouTube is at war with musicians, possibly not doing everything it can—or should—to keep unauthorized work off the platform, all while raking in big bucks it doesn’t have to disseminate to the artists.

But maybe there’s another question here: Why is this battle becoming such a big issue now?

The underlying issue might very well be the dated nature of the Digital Millennium Copyright Act, the 1998 law governing artistic and creative content and its reuse on the internet.

“Everyone except Congress agrees that the DMCA is out of date. It is about 20 years old. We’ve changed a lot in 20 years,” says Carole McNall, a media law professor at St. Bonaventure University in Olean, NY (and, for the purposes of full disclosure, my alma mater).

As Tech Policy Daily noted in 2014, Section 512 of the DMCA has “outlived its usefulness.” Section 512 is the portion of the law that established a notice and takedown system for unauthorized or unlicensed content online. At the same time, that portion of the law established a “safe harbor” provision, protecting “certain internet businesses,” namely search engines and “those who host user-posted content are excused from liability for linking to or hosting infringing material provided that they take down the file after receiving a specific notice identifying the infringing file.”

This provision has become a “20th century solution for a 21st century problem,” Mark Schultz wrote at the time. The system “is based on antiquated premises that seem more than a little quaint today. At the time, the hope was that the spread of an infringing file could be contained if it was stopped at the source fairly quickly, like an outbreak of infectious disease.”

That hasn’t been the case. At all.

Pirated or illegally produced content that doesn’t have the express approval or authorization from the original artist takes money out of the artist’s pocket, and inaction on the part of YouTube to keep unauthorized content offline, in a way, encourages such material to exist and become popular.

“The music industry has long claimed that YouTube is not nearly as effective as it claims to be at identifying copyright-infringing videos uploaded by fans or other third parties,” writes David Holmes at FastCompany. “The DMCA’s ‘safe harbor’ provision protects the platform…provided that the site was unaware of the infringement. (These protections were crucial for the growth of social networks where the majority of what is posted there is submitted by users, unvetted: Without the provisions, sites like Twitter and Facebook would have likely been litigated into bankruptcy and oblivion.). In turn, if a copyright owner or her representative reports and example of copyright infringement, the site must take steps to remove the offending material or the site can be held legally responsible.”

A YouTube spokesperson issued a statement in July saying the “overwhelming majority of labels and publishers have licensing agreements in place with YouTube to leave fan videos up on the platform and earn revenue from them. Today the revenue from fan-uploaded content accounts for roughly 50% of the music industry’s YouTube revenue. Any assertion that this content is largely unlicensed is false.” Content ID, launched by YouTube a decade ago to ensure artists are paid for their work shared on the platform, has paid out $2 billion to artists and has identified copyright violators 99.7% of the time, FastCompany notes.

Labels, it seems, scoff at the assertion. The Wall Street Journal in June quoted label executives as saying YouTube has a success rate closer to 50%, and a representative from Sony told the paper that the label had found 1.5 million copyright violating videos on the network in the past four years, leaving artists uncompensated to the tune of $7.7 million.

Irving Azoff, manager for bands like the Eagles and Van Halen, tells Rolling Stone simply that YouTube is just a bad partner. “YouTube revenue for a superstar artist is a bad joke,” he says. “Their accountings are too complicated and opaque to give an accurate per-stream number. They’re acting like an old record company by making the accountings so difficult, the artist remains in the dark.” According to his calculations, there are some “48 million unauthorized plays per day. That still requires an army to manually claim the remaining videos,” if the 99.5% claim is taken at face value.

And while the DMCA should be revised—it’s something artists and other digital platforms agree is long overdue—the real source of frustration, animosity and tension between artists and YouTube or other streaming services probably comes down to something decidedly old-fashioned: Money.

The DMCA was written in a time before streaming existed. That single development “appears to have changed the money calculations for musicians dramatically,” McNall says. “Streaming is increasingly replacing music purchases for a large chunk of the audiences.

She warns, however, that some of the changes artists are suggesting be made to the DMCA would put streaming services out of business—a dangerous proposition given how fans are finding new music, but one artists might be willing to embrace given the perceived massive loss in revenue compared with the fraction of a cent rate they currently receive from streaming platform.

“From a legal standpoint, even YouTube can’t catch all the infringement, especially in a world where tons of people believe simply posting ‘not intended to claim copyright’ is enough to protect them” from takedown notices or cease and desist letters from angry attorneys, she warns.

More than half of an artist’s revenue from streaming goes to the labels, which might have been a fair breakdown in the past but might not be equitable any longer, McNall suggests.

It “doesn’t seem like labels in 2016 are quite as important as they might have been even 10 years ago,” she says.

“The model of how people deal with music is changing,” she continues. Far fewer young people want to own the music; they’re content with streaming it…We’ve all gotten somewhat used to being able to get something for nothing online.” She’s also observed that most millennials in her class “simply want to stream” whatever tunes they’re listening to, instead of owning the record.

McNall ultimately thinks the blame for the situation “dealing with content/privacy are so out of date. It’s not just the DMCA—the last major rewrite of copyright law was 1976.”

FastCompany’s Holmes says the real truth might be more complicated. “Read between the lines of the letter (sent by more than 100 artists last month to members of the US Congress), and a larger, and more lucrative and familiar, problem appears: The royalties that an artist or songwriter gets each time a stream of their song is played are declining.

There’s plenty more to read and consider, but let’s consider these two infographics from FastCompany for a moment: 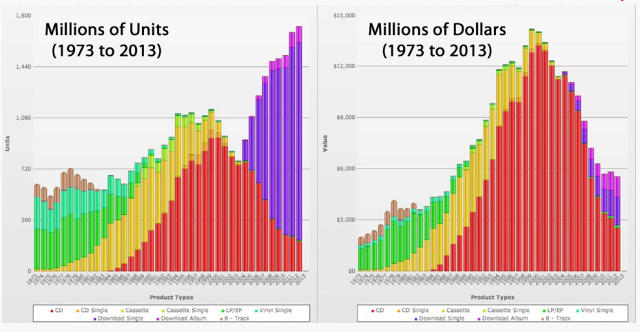 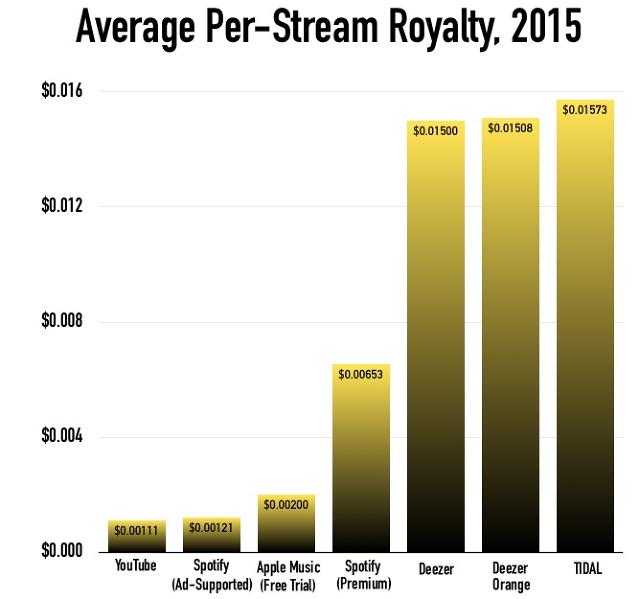 In the US, Congress is currently out on yet another break, not due back for another few weeks from the August recess. Don’t look for any changes to be made, or even proposed, to the DMCA until January at least, after the presidential election is over. Depending who wins, it might be an even longer wait, meaning an even messier fight could develop in the meantime. Keep the popcorn ready.