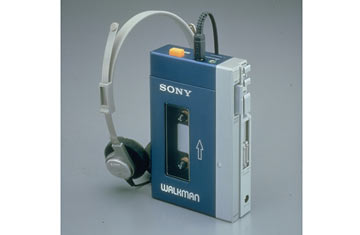 I don’t think any of us would be caught dead in public with an old-school Sony Walkman these days (ironic hipsters excluded, of course) but if you were around when it was first unveiled in Japan on July 1, 1979, the thing was something out of science fiction.  They called it the TPS-L2.

First, it was small (well, small for the era) which meant you could take it anywhere.  Second, it ran on a single AA battery, which was very convenient.  And third, those headphones!  While they have nothing on today’s earbuds and their relatives, those early ‘phones were so light (50 grams or less than two ounces) and they sounded almost as good as the full-sized audiophile models, which could weigh up to a pound.  Or more.

A couple of things to remember about the Walkman.

–The first version of the device had two headphone jacks. That’s because Marsaru Ibuka, the co-CEO of Sony, refused to believe that anyone would be anti-social enough to want to seal themselves off from the rest of the world with a bubble of noise. He was wrong.  The second headphone jack disappeared on the second iteration of the Walkman.

–The other Sony co-chairman, Akiro Morito, absolutely hated the name “Walkman,” which is why other countries had their devices labeled as the “Soundabout” or the Freestyle or the Stowaway.  But when someone dared tell him that a big worldwide promotional campaign had already begun using the name “Walkman,” he shut up.

–So where did “Walkman” come in the first place?  Because of the popularity of Superman, thanks the the release of the first movie in December 1979.

–The popularity of the Walkman and its imitators briefly made pre-recorded cassettes the biggest-selling music format in the world.

–The Walkman introduced the idea of Japanese gadget culture to the world.  From the moment it was introduced. many of us aspired to have the latest and greatest miniaturized consumer electronics gear because (a) it was cool; (b) it showed the world we were hip; and (c) it showed that we were affluent enough to do (a) and (b).

–In case you were wonder, the first Walkman sold for $200 USD, equivalent to about $625 CAD today.

–The Walkman also contributed to the early 80s fitness craze.  Now you could jog, bike,roller skate (a Big Thing in 1979-80) or engage in any number of exercise activities to music.  And not just any music:  a personalized playlist that went wherever you did. That had been all but impossible prior to July 1, 1979.  One report says that the number of people who admitted to walking for exercise increased 30% thanks to the Walkman.

–Over 300 million Sony Walkmans of various types have been sold.

–Every five years between 1979 and 1999, Sony would come out with a special anniversary edition of the Walkman on July 1.

–Sony did NOT invent the portable music music device.  Credit should go to Andreas Pavel who came up with something called the Stereobelt in 1972.  Pavel battled Sony in the courts for years before he finally received payout compensation for patent violations.

–The Walkman name was later applied to portable CD players (although DiscMan is the name that stuff), video players, MP3 players and mobile phones.  But then along came Apple’s iPod and–well, you know what happened next.

–In October 2010, Sony announced that cassette-based Walkmans were finally being phased out in Japan although production would continue in China to accommodate demand in nations where the cassette was still alive and well.  But once those final units were sold, that would be it.  I wonder if you can still buy a brand new cassette Walkman somewhere?

Here’s a nice pictorial history of the portable music device from The Telegraph. Still skeptical about getting an Apple Watch? This may help.