This week we veer into an area of music you may not have expected this column to ever cover. We’re taking a look at the pop music of the 80’s and a young kid’s desire to belong.

As long as I can remember, I was always labeled weird. I liked comic books and Star Wars to a near obsessive level. I didn’t have a huge interest in playing hockey like the other boys my age. I had started to have an interest in girls but wasn’t quite sure what to do with them or how to talk to them.

What I did know was that the cool kids liked popular music. I liked the music too, just not what these kids were into. I liked the stuff my folks listened to. The Beatles, the Little River Band, John Mellencamp. But if I wanted to be cool, I needed an in. That in was popular music.

I remember listening to the pop music of the era and not getting it. I didn’t understand why New Kids on the Block were a thing. I liked some o the stuff that Tarzan Dan played on his radio show but it wasn’t until I saw a couple of young guys with long braids dancing like weirdos that I found the band I would hitch my wagon to. 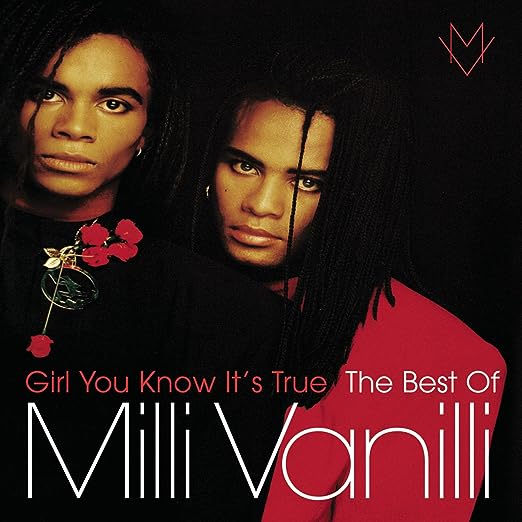 I asked for and received the tape for Christmas and even tried to learn the dance steps from the video for “Girl You Know It’s True” to no avail. For some reason, spontaneous solo dancing never broke out in our class dances. Not that I would have tried, way too shy to have even thought that.

And then the unthinkable happened.

They were fake. They were a couple of frauds who just mouthed the lyrics. I was done, no more pop music for me, I’d stick to what I actually liked. I would retreat back to the music of my parents until the era of alternative was in full swing.

Weirdly, I learned a lot from this brief foray into pop music.

Lesson 1: Music can be bullshit. Up until that point, I assumed all bands were just as talented as they sounded. You went in and came out of the studio sounding exactly the same. Milli Vanilli started the process of taking a deeper look at the music. Due to Milli Vanilli, I tend not to trust pop acts that do a lot of dancing while they do a lot of singing. I’m also very suspicious, right or wrong, of any artist who doesn’t tour at all. Like my subconscious says “Milli Vanilli got caught, these jerks have learned their lesson and just don’t tour.”

Lesson 2: The music industry can be bullshit. While initially, I was mad at these guys, even at that young of an age, it did turn into a bit of pity. It really seemed like Fab Morvan and Rob Pilatus got thrown to the wolves. Something about that didn’t sit too right with me. Later, when I would see the VH1 Behind the Music on the duo, I find out how right young Brent was. All these kids wanted to be was famous and live well. A producer dangled a carrot in front of them and promised: “You’ll sing on the next record”. Of course, these kids took it, they were couch surfing and living on benches. After the music industry found out their secret, they were destroyed. They couldn’t even be friends anymore because of it. They avoided each other because if someone caught them in public together, the jokes would start and that my friends, is very sad.

Lesson 3: Music won’t necessarily make you cool. Not in elementary school at any rate. As it turned out, liking a band that the cool kids may have liked (I’ll be honest, I’m not sure any of them did, I just kind of made that assumption). I was still a weirdo, now I was just a weirdo who may like the one band they may like for that month. Which was for the best really. I had a group of friends that I got along with well and a few years later, I would find like-minded people with similar tastes in music and film as I when I hit high school. It would be in high school that I would meet my tribe.

As always, we have to talk about the actual music. How does Girl You Know It’s True stack up? In a word, awful. I’m not sure what it was that grabbed me about these guys. The vocals were nothing spectacular and as an adult, I kind of see why they would have hired Rob and Fab on. The music itself doesn’t stand out at all, even fro 80’s pop music. I wonder how I completely avoided good music of the period like New Order and Crowded House and went for this crap. Oddly, I can’t even share the album with you as Spotify doesn’t carry it, instead, you will have to make due with their greatest hits… which is pretty much Girl You Know It’s True with bonus material. Maybe it’s a little bit of residual betrayal creeping in but I doubt you’ll get much beyond a song or two.

From the bad and slightly depressing we’ll go to a man who seems to be a Rock and Roll immortal, Iggy Pop. And it’s probably not the album you think it is. 2 thoughts on “52 Albums That Changed My Life (and Other Exaggerations), Chapter 9: Girl You Know It’s True”