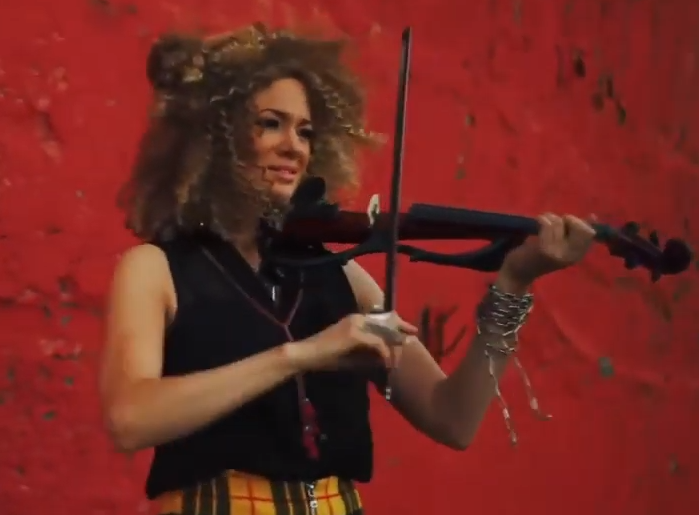 When I was a kid and faced with the prospect of music lessons, my polka-loving parents gave me a choice: the accordion or the violin. For reasons that I would later regret, I choice the accordion.

At the time, though, it seemed like the right thing to do. When mom took me in for lessons at the Komar School of Music on Arlington in Winnipeg, the noise of other kids sawing their bows on cheap fiddles made my fillings hurt.

Later, though, I realized that while the accordion would never be cool (cf. Weird Al), the violin had potential, even in the world of rock.

It began with my first exposure to The Beatles’ “Eleanor Rigby” followed by some of the gorgeous string arrangements written by producer George Martin. I later became besotted with the eclectic performances of Laurie Anderson, Eddie Jobson (especially with Roxy Music), Jean Luc Ponty (my introduction to jazz fusion), Lisa German (John Mellancamp’s band), and L. Shankar (a frequent Peter Gabriel collaborator). And, of course, anything Pogues did was fine by me.

Another fascinating violinist is Miri Ben-Ari, an Israeli player who started playing at age five–she was immediately recognized as gifted–and was so good that the master himself, Isaac Stern, gave her an instrument when she was just 12. This set her on a course to become a great concert performer. At least, that was the plan.

After being expelled from the jazz faculty at the prestigious and very private The New School of Social Research in NYC for poor attendance–she was always out playing jazz gigs to pay the rent, even as she attended on a scholarship–she started working on original material between stints on Broadway and with a six-piece Latin band.

The next step was to release an album which she entitled Sahara. Then things took another weird turn.

Jay-Z took notice of her playing and found her a hip-hop gig in 2001. Then Wyclef Jean of The Fugees tagged her to play with him at Carnegie Hall. And in 2005, she co-write “Jesus Walks” with Kanye West, which netted her a Grammy for Best Rap Song.

From there, it was all rap and R&B for Miri with the violin figuring heavily in everything.

Her work has also been features in global promotional campaigns for companies as diverse as Reebok, Harmon Kardon, and Pepsi. And she’s performed for both Barack Obama and Hillary Clinton.

Then there’s the matter of all her humanitarian and charity work. She’s the co-founder of the non-profit CEDENK, which battles antisemitism and racism.

Miri has also been the recipient of many honours and awards, including being named as one of the ten most influential Israelis loving in America.

Intriguing, right? Miri will perform at the Rose Theatre in Brampton on Friday, March 13. Info and tickets can be found here.

Here’s a fast preview of what we can expect.

*This is a sponsored post brought to you by The Rose Brampton.*

10 thoughts on the Juno Awards vs. The Grammy: There’s no contest. Canada does it better.

An All-Star Version of “Fairytale of New York”