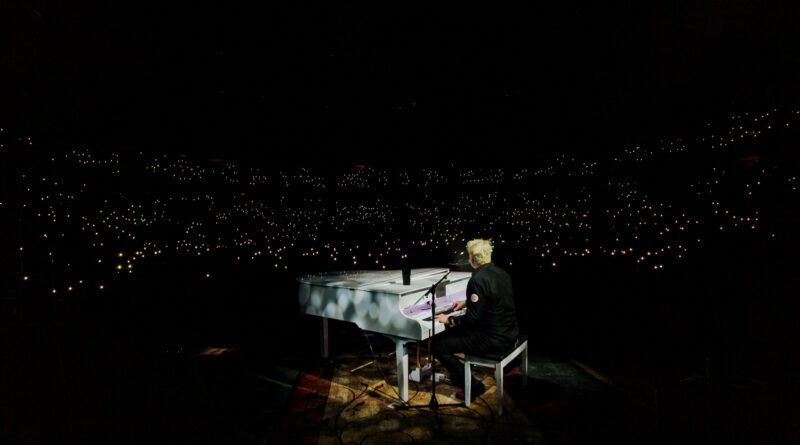 [Ross MacDonald and Karen Coughtery were on the case again. – AC]

It was a mild but dark and very rainy night in Ottawa Friday night but those attending The Offspring featuring Simple Plan Let The Bad Times Roll Tour concert at the Canadian Tire Centre didn’t seem to notice. The bands attracted a crowd of all ages but it appeared everyone had shown up in a uniform consisting of their best plaid shirt, band T, and black pants or jeans for the occasion.

The night began with the stage going dark except for some blinding red lights and the Star Wars theme blaring from the speakers. The light would turn white, a guitar would be strummed and the crowd would come alive as Simple Plan opened with their hit ‘I’d Do Anything’. Perfect for a band called Simple Plan, the stage set up was simple with their three-icon logo projected on the screen along with stands of lights that changed colour to suit the mood of the songs and moved and flashed with the tempo.

They got the crowd going with ‘Jump’ and ‘Jetlag’ (on which they were joined by artist Arielle Ackford) but the party would really begin when they would launch several beach balls into the crowd on the first chorus of ‘Summer Paradise’. The fun times continued with a medley of party song covers Smash Mouth’s ‘All Star’, Avril Lavigne’s ‘Sk8er Boi’, and The Killers’ ‘Mr Brightside’.

Simple Plan’s first album, ‘No Pads, No Helmets…Just Balls’ recently turned 20 and they played old-school hits ‘Addicted’ and ‘Welcome To My Life’ before introducing the crowd to a brand new song off their latest album ‘Harder Than It Looks’ (insert “that’s what she said” joke here.) ‘Iconic’ they explained, was written as a FU to everyone growing up who made fun of them for being weird or different.

They really showed all sides of their music even including a performance of ‘What’s New Scooby Doo’ as they are the band that performed the theme for the early 00’s Warner Bros. Animated series.

In a memorable moment of their set, Chuck would get a chance to take center stage and Pierre would take a turn behind the drums for their 2002 hit ‘I’m Just A Kid’ which has seen a recent resurgence in popularity, thanks to the TikTok app. Chuck, remembering Ottawa is a very bilingual city would speak in French to the crowd, speaking about how much he has missed doing shows and getting into the mosh pit. A mission to high-five all the guests on the floor would see him delight the audience by crowdsurfing.

Simple Plan would end their set with Pierre apologizing for not having spoken more French and recognizing and thanking the plethora of francophone fans in attendance before taking up an acoustic guitar to play their beautiful song ‘Perfect’.

They would leave the stage with Pierre performing a magic trick of sorts, making what looked like a pair of black ladies underwear appear and then disappear and then with the help of the band throwing a few more into the crowd.

The time between the acts, usually a quieter, uneventful part of the night was anything but at this show. Alt-rock music started as soon as Simple Plan left the stage and the screen quickly turned to quirky animated video clips. Next, a white blimp emblazoned with The Offspring logo appeared in the air. The screen told the crowd there was a blimp cam and the next thing you know it was dropping things into the crowd. Only the crowd on the floor knows what the mysterious black items falling from the blimp were but the best guess was rolled-up signs that when unfurled read “F*ck You”. This would make sense as next the audience was encouraged to mug for the ‘F You cam” the second in the series of cams that included a kiss cam and a head bang cam. And just before The Offspring came out, they ran a video clip of Dexter flying his fighter jet to the new-wave song ‘Take On Me’.

It is no surprise that The Offspring would have a skull theme to their tour and the official tour imagery that would welcome the band to the stage (to their song ‘Lullaby’) had a very beautiful Dia De Los Muertos feel to it, with a stunning woman in skeleton-like makeup. The imagery was a big part of the show and the bold graphics, inspired by the obvious skulls, lyrics, album art and music videos really grabbed your attention. The round screen was bordered by a large circle of lights that often had the lights rotating around and appeared much like a ferris wheel going much too fast.

The crowd was engaged and excited immediately as The Offspring kicked off their set with early mega hit ‘Come Out and Play’. They would join in clapping on ‘Staring At The Sun’, sung along with ‘Gotta Get Away’ and could be seen crowd surfing  during ‘Hit That’. The crowd was particularly amped for ‘Hammerhead’ which seemed very apt given the background video was of a wall of lightbulbs.

Not to be outdone by Simple Plan, during ‘Why Don’t You Get A Job’ The offspring would launch twice as many beach balls (this time polka dotted as if filled with confetti) into the crowd and four giant balloons would fall from the arena ceiling.

Dexter would get out of the way to let Noodles take centre stage to show off his guitar skills with the rest of the band. Noodles got his nickname years ago because he was constantly noodling on his guitar. He certainly lived up to his nickname by playing instrumentals of some well known favourites including Rush’s Tom Sawyer, Iron Maiden’s ‘The Trooper’, and a nod to the great Eddie Van Halen with solos from ‘Panama’ and ‘Eruption’. This would end with a segment he called “Noodle Plays With himself” during which he played ‘In The Hall Of The Mountain King’ by Edvard Grieg with a giant animated version of himself.

The instrumental interlude was followed by a peppy Ramones cover of ‘Blitzkrieg Bop’  complete with a “Hey Ho, Let’s Go” sign guy who danced around the stage and re-energized the crowd. Much appreciated, as the audience was full of excited energy for mega hit ‘Pretty Fly (For A White Guy)’ where the band was joined on stage by two sky dancers made to look like actor Guy Cohen from the music video.

In a more serious moment of the night Dexter thanked the crowd for coming since the concert had been postponed from earlier in the year. He shared that the last few years had been particularly shitty for him (as they had been for everyone) and expressed that he had experienced loss and sympathised with all those in attendance who had experienced similar. He would perform ‘Gone Away’ on piano surrounded by the twinkly starry night of cellphone lights illuminating the arena.

Just as some might have thought the night was over, The Offspring blimp returned, this time glowing green, and The Offspring equivalent of the bat signal appeared on the far side of the arena to welcome the band back to the stage for an encore. The crowd was excited to welcome them back, singing and bouncing to ‘You’re Gonna Go Far Kid’ but the night ended on the highest of high notes when the band finally played their other mega-hit from the 1994 album Smash, ‘Self Esteem’ after which the band raised their guitars in salute to the crowd, declaring it ‘The best Friday night ever’!

Throughout the night, the band heaped compliments on the Ottawa crowd remarking on the ready to rock, party energy of appreciation and adoration that was clearly radiating throughout the building. They would say the town was more like “Hot-tawa” and declare that the audience was “a bunch of fucking angles with perfect pitch”. This was the right note to take in a city whose crowds are often wrongly slagged. The band took the time to pose for a photo before eventually leaving the stage and the audience was in a good mood as it was forced to return into the dark, very rainy night. Musicians talk about drugs, right? Here’s how to do it right.

Is This the Artwork for the New U2 Album Called Lucky Number?