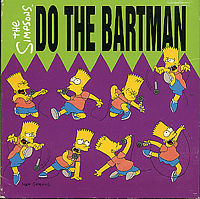 Longtime fans of The Simpsons will remember this ditty from 1990.

In case you weren’t around, “Do the Bartman” was a massive novelty hit, reaching #1 in the UK, Australia, Ireland, Norway, New Zealand and Norway. It reached into the Top 10 in Finland, Netherlands and Sweden and got as high as #11 on the American airplay charts even though the song was never officially released as a single.  (I think the same applied for Canada, but I can’t remember.) The damn thing sold 400,000 copies of a single in Britain alone–plus it received a nomination for the MTV Music Video Awards

So what? A one-hit wonder that saw its day and then forgotten.  Well, maybe there’s some gold here.

It’s rumoured that the song was co-written a huge Simpsons fan named Michael Jackson. He’s uncredited–a necessity since this single came out on Geffen and Jackson was the property of Sony–but the story goes that he called up the producers one night and offered to write a #1 hit for the show and do a guest spot on the program. (You’ll remember that one: the uncredited appearance as a gentle mental patient who befriends the family.)

The rights to “Do the Bartman” have just been sold to an anonymous buyer for $38,500 USD. If the Jackson rumours are true–and there’s a tremendous amount of evidence that they are–then this could be one of the biggest bargains in the history of music publishing. What Tragically Hip Lyrics Should Be Written in Stone?