The Man Machine Poem tour has been in the books for two weeks now, but stories about the band keep rolling out. It started with this item on how the Tragically Hip totally dominated the music charts this past week. Since then, these stories have come out.

Ever hear of a band called Kasador? They’ve been playing around the country opening for bands like Arkells, Wintersleep and Walk Off the Earth. This five-piece band features a bass player named Boris Baker (son of the Hip’s Robbie) and drummer Angus Fay (nephew of drummer Johnny Fay). Kasador is about three years old and has to work in their gigs between Boris’ studies in the neuroscience department at Queen’s. Angus is study jazz/performance drum kit at Humber in Toronto. Here’s a sample of what they sound like. (Via Kurt and Boom 99.7)

Canadian rock group The Tragically Hipleads the LyricFind Global chart (dated Sept. 10) as “Ahead by a Century” debuts at No. 1.

“Century” debuts with three other Tragically Hip songs on the LyricFind Global chart: “Nautical Disaster” bows at No. 8, “Blow at High Dough” at No. 18 and “Bobcaygeon” at No. 22. Notably, none of the four songs on the chart are from the group’s most recent album, Man Machine Poem, released June 17. Rather, the songs are from various albums by the band dating back to 1989.

And The Tributes for Gord Keep Coming

Adam Wallis is studying radio at Seneca and sent me this article. And since he used the word “fortnight” correctly in a sentence in his email, I thought I’d link to his Hip story.

A truly bittersweet evening for the Canadian nation. 3 months in the works was this spectacularly intimate evening with The Tragically Hip. Was it the closing night for the ‘Man Machine Poem’ tour, or the very last Hip show? Who knows? For those who attended the concert and caught the live CBC broadcast, I think it’s safe to say that after seeing such a beautifully intense performance, we all believe that this really was it for Gord and the lads. 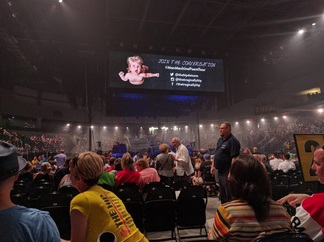 For the readers who reign outside of the Great White North, The Tragically Hip are a 5-piece band whom have represented this country with great honour and integrity since the mid ‘80s. When it comes to Canadian music, at first you’d probably think Rush, Barenaked Ladies, or even The Guess Who – whom over the last few decades have all released a plethora of top 40 hits and best-seller albums – but to be fair, the Hip should be the first ones that come to mind – oh, and don’t call them by their full name, that is blasphemy in this country. It’s just “the Hip” – for they are an integral part of this nation’s culture. They have continued to release solidly touching albums and anthems that represent the history, geography and beauty of their precious mothership for the past 30 years. There is something remarkably enticing about the subtle blend of ingeniously smooth songwriting and extreme charm of showmanship within this group. I would recommend the Hip to all who have a heart and those who can experience goosebumps when listening to music. Start with Road Apples!
Read the whole thing here.

Subscription Streaming is Growing, But…

One thought on “And the Tragically Hip News Just Keeps on Coming. Let’s Get Caught Up.”