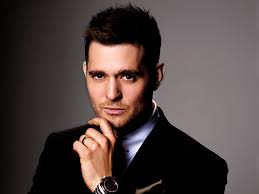 A report has come out indicating the music business in British Columbia is in serious decline. Who better than Michael Buble to come to the rescue? What a good Canadian boy.

The B.C. music community brought out its big guns Thursday as part of a provincial push to reinvigorate the local industry.

Michael Bublé joined Premier Christy Clark as she announced a $15 million grant to help create a B.C. Music Fund, and a lengthy report — B.C.’s Music Sector: From Adversity to Opportunity — was released.

B.C.’s Music Sector: From Adversity to Opportunity
Clark recalled her first gig — local punk bands D.O.A. and Pointed Sticks at the Italian Cultural centre when she was in Grade 10 — as the point at which her love for live music began.

She talked of seeing Green Day in the early days, as well as Bublé, when he was just 16, performing in a local mosque.

Buble was an important part of the production of the report and wrote the forward to it.

The report — with a forward by Bublé — argues that music is a strong force in the province, not just culturally and artistically, but also economically, and recommends several strategies for building on it as a resource to drive education, employment and tourism.

According to Bublé, the opportunities afforded to him growing up as an aspiring musician in B.C. are much diminished.

“When I look back, I realize how lucky I was,” he writes.

“There was a thriving music ecosystem in BC with the people, support, infrastructure and funding that made it possible to move up the ladder. Young artists today face a starkly different reality.

“Opportunities for musicians are fewer and further between.” Thought It was Weird When Gene Simmons Tried to Trademark the Devil Horns? Taylor Swift is Trying the Same Sort of Thing