As much as I really dig the outskirts of metal with genres like industrial, I never really got into thrash metal. Despite the fact that Ministry on Psalm 69 borrows heavily from thrash metal, there wasn’t a thrash metal band that I could get into. Metallica’s early albums were never a thing for me. Yes, I am one of the few Metallica fans who got into the black album first and didn’t really look into their back catalog until years and years later. I remember my friend Jeremy playing And Justice For All and just not finding anything interesting about it. The same would go for Slayer.

Up until a certain point, I regarded Slayer as a goofy band. All of their “satanic” imagery just seemed so fake and put on. At least Anthrax seemed to have a sense of humor. And all of Slayer’s songs sounded the same. Why would anyone bother with this band?

That was my thought process until a snowy afternoon at a crappy job and a man from Poland showed me the error of my ways.

I’m not sure how much detail I should go into, just to simply cover my butt but I had a two-year career as a repo man for a rent to own corporation. They gave us a fancy title but the nicest version of it was I was a collector. If you didn’t pay for your merchandise, I was the guy you got to talk to. You made it a habit, I was the guy who visited you. You tried to disappear, I was the guy who found you. I was really good at it. 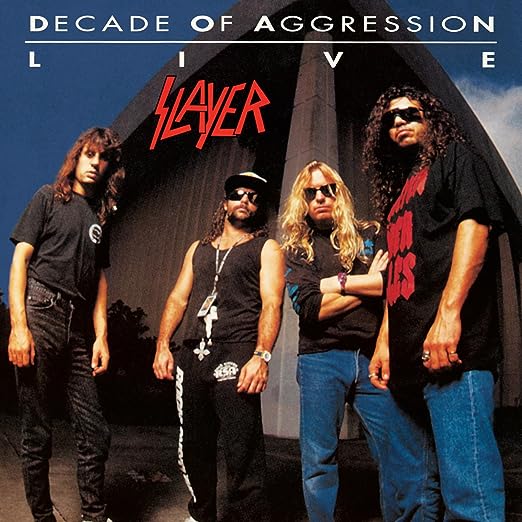 I hated every minute of it.

Now, the people who tried to scam the company, I had no problem going after them but the people who couldn’t pay their bill because some salesman overloaded them with stuff, that could be genuinely soul crushing. I once had to pick up a bunk bed because the mother hadn’t paid in nearly two months and the kid who slept in said bunk bed asked me why we were taking it.

Burnout for your average collector was six months, I did it for two years.

And I reiterate, hated every minute.

It was during this period, two things happened. I became a very heavy drinker outside of work and I started listening to heavier and heavier albums on a more regular basis. Ministry, Slipknot, and Nine Inch nails were on high rotation.

One of the gentlemen I happened to work with in this job was our delivery driver, a man from Poland named Tom. Tom was one of the nicest, most honest people I ever met. As a collector, Tom was incredibly handy to me as he was six foot something and when wearing sunglasses, he looked like someone who knew how to dispose of bodies. When the occasional threat would come my way, Tom would just roll up beside me and the threat would quickly become a joke. The two things I had in common with Tom were that we both hated the company we worked for and we both loved music.

We discovered this connection when we were both stuck in the store. The weather had turned pretty terrible outside so all deliveries and collection runs were canceled. Of course, it wasn’t terrible enough to let the employees head home early. No, we had to man the store in case people came in wanting to get a new couch set.

With no one coming into the store, Tom and I started talking about music. I asked him, what he was into. “Oh,” he replied in his heavy Polish accent, “I like many things. I like rock, I like dance. I like classical, Slayer, The Beat…” “Wait… did you just say Slayer?”. “Yes… I have them in my car right now.”

Now, store policy prevented me from playing our music over the music system in the store. It didn’t prevent me from testing out one of our new stereo systems for sound quality. Tom brought in Slayer’s Decade of Aggression, a double-disk live set. Even if I didn’t think I was going to like Slayer, it was better than us listening to the Janet Jackson: Live from Hawaii DVD for the 8th time that day. We set up the biggest speakers we had in the store and tom let it rip.

Why did I not like this band? This was everything I wanted. It was aggressive, it didn’t care about if you liked them or not. It was fast, it was loud, it was the sound of furry sent through a huge stack of amplifiers. I went out and bought the set the next day.

Slayer would open the doors to the metal world that I had never really looked at. Metallica’s back catalog, Sepultura, Soulfly, Pantera. I would go on to get into what is referred to as the New Wave of American Heavy Metal with bands like Killswitch Engage.

After I left that job (where I gave three weeks notice and they tried to fire me the next day), my aggressive music phase slowed down a little but my love of Decade of Aggression did not.

It’s pretty much a Slayer’s greatest hits for that era of the band. The sound and fury of that album is still amazing to hear. In fact, the only weird thing is, some of the over the top stage raps that appear in between songs. Tom Araya saying stuff like “This one is for our friends returning from the Persian Gulf. It’s called Mandatory [pauses for dramatic effect] Suicide!”. In the end, I guess there is a certain amount of goofiness but as part of the overall package, it provides a bit of a breather before the engines wind up again and crush you with the power of metal.

The thing is, this is the only Slayer album I own. For whatever reason, I’ve never gone back and bought other albums. I’ve listened to them and honestly, I think they’re still doing some good work but at the same time, Decade of Aggression really feels like the perfect Slayer package for me. It’s mainly hits, it captures their live show and you can crank it really loud.

What I learned from that album is just because something seems goofy, you should maybe give it a listen. You might be surprised at what you hear.

Next week, an entire album about murder! 2 thoughts on “52 Albums That Changed My Life (and Other Exaggerations), Chapter 7: Slayer’s Decade of Aggression”