Back in the spring, Ben Kowalewicz of Billy Talent confided something in me.  “Don’t tell anyone,” he said, “but I’m going to try acting.” He was reading for the co-lead in a production called A&R Angels written by Kevin Drew of Broken Social Scene.  And he got the part

Ben will co-star with Kevin in a production that’s part of the Crow Theatre’s 2017-18 season. It’s a semi-biographical comedy set in the music industry where Kevin and Ben play angels–actual angels–who have to compose a song that is so catchy, so uplifting, so anthem, so positive that it will save the world.

Ben told me that the idea of acting scared the crap out of him, but he wanted to try something different, a project that would push him out of his comfort zone.

“But it shouldn’t be that hard,” I said. “I mean, you assume a role as a frontman every time Billy Talent steps on stage. Isn’t this sort of similar?”

“Not at all,” he replied. “I have to learn lines. I have to get into a character that’s not me and make it look convincing.” And now that Ben has had a chance to read for and rehearse the part, he’s found that he really likes acting.

The production will open on November 20 and run until December 9 at the Crow Theatre’s new $11 million space at 345 Carlaw in Toronto. If you want tickets, go here. 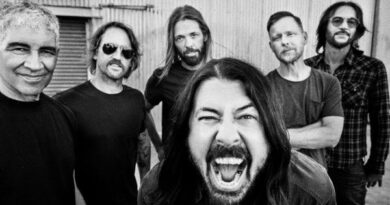 What do the Foo Fighters do now?

SLAYER’S Kerry King and His Snake Warehouse. (NOT a Metaphor)