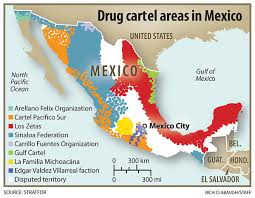 The Mexican drug wars have taken thousands of lives.  Cartel vs. cartel. The government vs. the cartels.  Vigilantes vs. cartels.  It’s very, very ugly and very, very scary.

But life goes on.  I found this fascinating article about Mexican club culture on the Red Bull blog.

James Zabiela hops onstage with a wide smile and excitedly shakes his short blond hair. He looks like a tennis player stirring up the crowd on center court. The Englishman greets the audience and prepares his tools of the trade: turntable, iPad, headphones, and all kinds of electronic gear, as the crowd dissolves into applause and piles up in front of the elongated stage.Zabiela drops the first beat and the people go crazy, pushing against each other, taking his picture and holding their tickets to the show high in the air. The initial commotion from the encounter with the DJ-turned-rock-star passes, and the mass of people—some 600 in all—move together in spasms, heads bobbing, hips thrusting. They all dance.

It’s just another weekend at the Hardpop, a medium-sized club with sober décor that’s nestled in a shopping mall in Ciudad Juárez, the deserted, chaotic and deadly city that shares a border with El Paso, Texas.

On this night, no one remembers the thousands upon thousands of dead the city has buried in cemeteries or clandestine pits. They don’t remember the brawls between drug dealers, the gunfights, the extortion, the torture, the brutal murder of women or all the other horrific headlines that have come to define Juárez and made it infamous for being one of the most dangerous cities in the world.

Instead, the frenzy of Hardpop’s patrons, their dancing, and their almost ridiculous devotion to the DJ have earned the club another distinction, one that’s far more superficial but a million times more encouraging: According to the U.K. publication DJ Mag, the club is one of the top nightspots in the world.